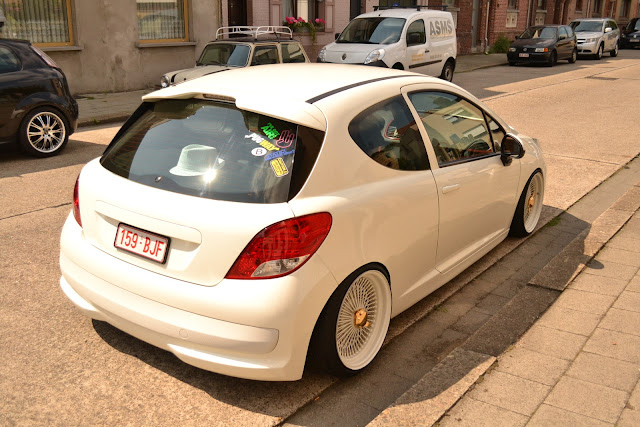 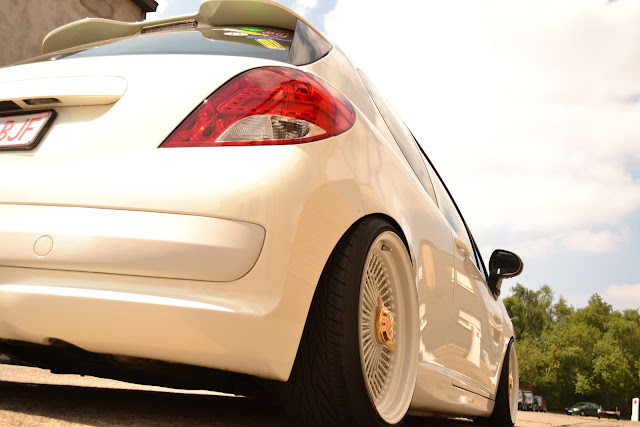 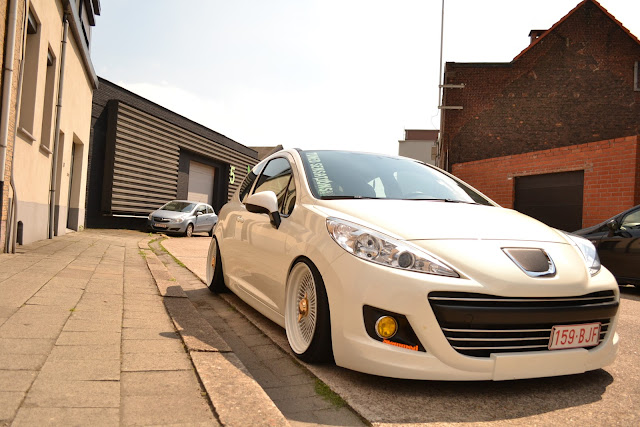 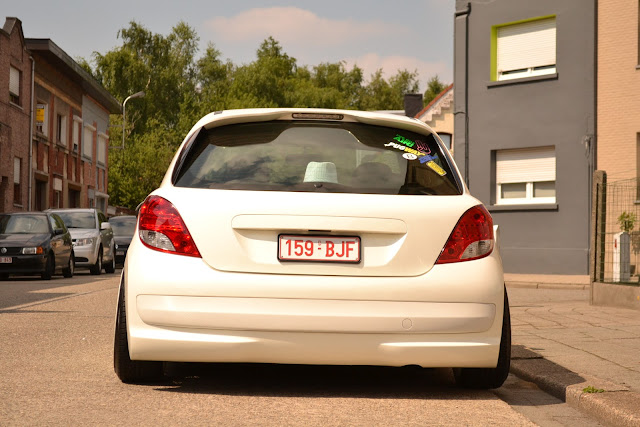 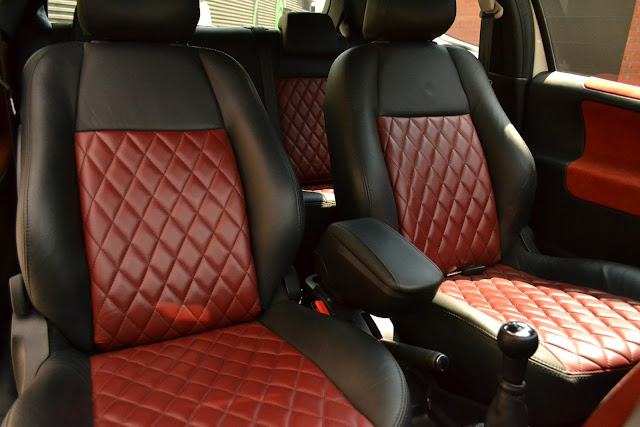 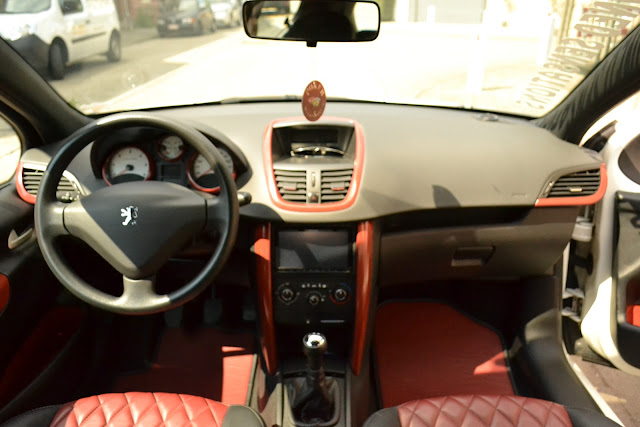 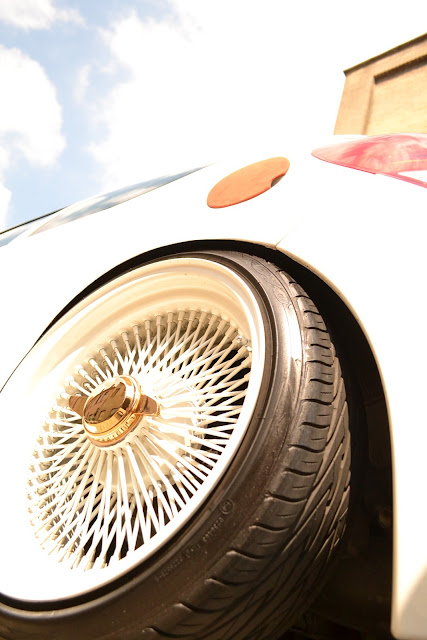 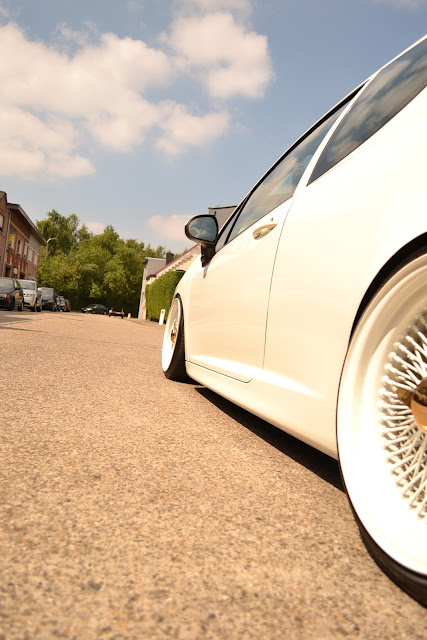 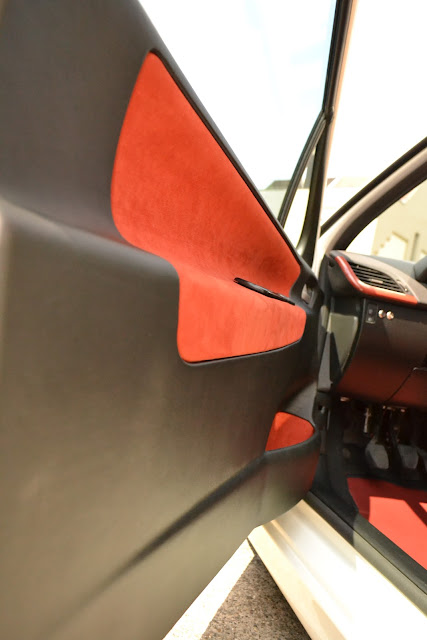 Here's a short write up on the car from Tim himself...


On 15 March 2010 I got the Peugeot from my local dealer. Then when I got home, I put Keskin wheels underneath the Peugeot because I didn’t liked the stock wheels. Also did I cleaned the car in my opinion.
A week later I removed the letters from my trunkdoor. And put some shorter antenna instead of that big ugly one.
In April 2010 I received my coilovers from Weitec, so I mounted them straight on the car to get him lower. In the beginning it was lowered just a little bit.
So after that I decided to paint the wheels to match the colour of the car (pure white).
From that point I’ve driven some kilometres in this state. After a while I wanted a leather interior so I want to T&T car interior, and after 3 weeks my interior was Bentley bordeaux and black with with check pattern.
Then I started on some sound quality in the car. I was tired of the original speakers because the quality of them was bad (and I mean really bad). So I bought an head unit from Pioneer (the AVIC-F20BT) together with some nice speakers from Kicker.
It was a really great difference with the original speakers. I also wanted an eye catcher in the trunk so I decided to buy an flat woofer from Kicker the compvt12.
Then after doing some show’s I looked at the Peugeot and saw it wasn’t what I wanted yet, so like he’s rolling to high in my opinion so I decided to buy some shorter springs. No sooner said than done, from that point the Peugeot was slammed to the earth. Then also I painted the keskins red with a white cup. Then I decided to get wider. So I’ve widened the wheel arches. Then It was winter. I had some accident’s during the winter months. And had them repaired but instead the normal repair stuff. I did some body modifications like the hood, roof and doors smoothed. Also deleted the logo on the trunk. Then I decided to get another colour for my car. I was thinking like “hmmm which colour should I take?? Mmm”, then I saw a car with a DAMN nice colour and I told against myself “Tim that’s the colour I’m going to take.”. After that the bodyworks where done. I told my local body shop to paint the car in that specified colour (pearl white). But while the car was into the bodyshop I ordered some new wheels (Wire Wheels) so I let them coated in the same colour like my car. When he was finish I’ve put them underneath the car and I was in love!!. But then they where mounted with a chrome centre lock bolt. (a point-shaped one). I didn’t like this so much so I’ve got the original centre lock bolt from those wheels and did them to a specialist to get them in gold. Once they were gold put them on the Peugeot with those wheels. And it was a total new car.
The car has done some different show’s:
1.    French Car Show in the UK with the red keskin wheels polished edge
2.    100% Ahoy 2011 with the red keskins with the white edge
3.    Tuning Saarbrucken with the white wire wheels (got top10 french car there and there where more then 500 car’s)
So this was my short story for the Peugeot. And a lot of people love him, because he’s so different from the other cars and he’s used for daily drive.

Email ThisBlogThis!Share to TwitterShare to FacebookShare to Pinterest
Labels: peugeot