So the schedule for this years Drift Allstars has been announced...

The new look Drift Allstars European Series kicks off in London 2013 with a bigger focus on European international events with 7 exciting major events across 6 countries. Running from April to September Western/Northern and Eastern Europe will be covered making sure the best drift drivers in Europe get to test there skills against the local drivers. 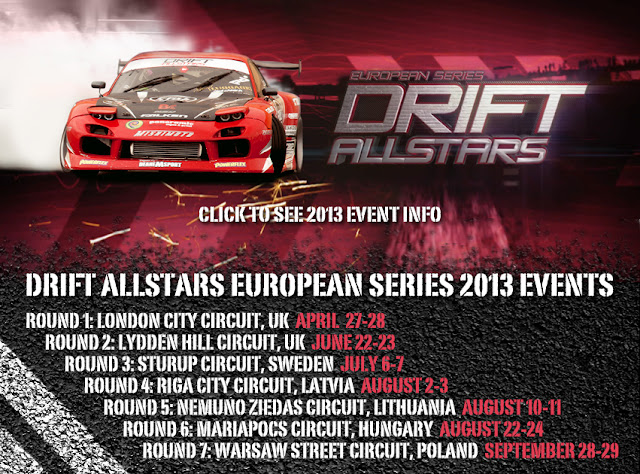 Round 1 – (UK) London City Circuit – April 26-27th
Drift Allstars kicks off the season at our home – London City. Famous for central city events, Drift Allstars have been very lucky to secure a city centre location. London has always been the premier event of the season and no better place the kick off the season than in the capital. More info soon!
Round 2 – (UK) Lydden Hill Circuit – June 22nd
Drift Allstars returns to Lydden Hill for the first time in 3 years. This high speed course in Kent is the gateway to Europe and the rest of the international events will get the guys up to speed before making the journey.
Round 3 – (Sweden) Sturup Circuit – July 6-7th
Sturup Sweden marks the first European leg of the 2013 tour. This will be another high speed course famous in northern Europe for it’s steep decline course testing the best drivers in Europe. This sure will be a test between the Scandinavian drivers against Europe’s best.
Round 4 – (Latvia) Riga City Circuit – August 2-3rd
The Bikernieku race circuit is famous in eastern Europe for it’s action packed event, high speed layout and crazy Latvian fans – it will be one event to remember. Always a sellout event, the Russian, Latvian and north eastern European drivers will be pushing hard to make their mark on home turf in front of the international drivers.
Round 5 – (Lithuania) Nemuno Žiedas Circuit – August 10th-11th
The Nemuno Žiedas circuit in Kaunas will play host to what will probably be the fastest circuit of the season, with over 180km/h entries. Another demanding and fast layout which will separate the best drivers; the Lithuanians winning a guest event license shows they are amongst the most passionate event fans in Europe.
Round 6 – (Hungary) Mariapocs – August 22nd-24th
Drift Allstars returns to Hungary for the second year. The TRACKWOOD festival is hugely popular with fans from all over Europe, and in 2013 this event will be even bigger! A three day drift festival with the finals being run under the cover of darkness till the late hours is probably one of the biggest drift events in central Europe.
Round 7 – (Poland) Warsaw Street Circuit – September 28-29th
Drift Allstars will also make a debut in Warsaw, Poland. After having top drivers coming to England to compete for many years it is now time to bring the show to Europe’s premier national drift series. Can the Polish win on home turf against the best international drivers in Europe on this city centre based track on the downtown streets of Warsaw.
Posted by Shifted at 18:00